On the 24th of March, we assembled at the airport at 11 PM, and proceeded to complete the check-in and immigration processes.

Once the students settled into the comfy seats of the airplane, our teachers collected all of our passports. The flight lasted for around four hours, and we experienced some mild turbulence halfway through its route- although we were all so immersed in the airline’s extensive entertainment system that we failed to notice it!

We landed in Kolkata at 7:40 AM, greeted by humidity and winding immigration lines. After baggage claim, we were pleasantly surprised to see that a bus had been arranged to transport us to our hotel.

Upon reaching the hotel, we were given an hour to rest in our rooms and freshen up. However, several of us ended up without hotel rooms for hours, due to their unavailability. It is the IPL season in India after all! The mini-crisis was averted soon enough; the sumptuous spread during lunch definitely helped!

By 1:45 PM, we had already left for Future Hope, accompanied by our teachers and Mrs. Neogi. We started off by exploring the expanses of the building, with the students acting as our exemplary tour guides. 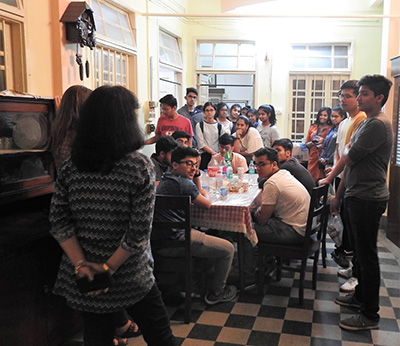 Afterwards, we conducted various ice breaker sessions in order to get to know more about and interact with the children. We also divided them into the three teams (Art, Music, and Lipdub) and explained the responsibilities of each member.

After having spent time with the children, Mrs. Neogi graciously welcomed us to her house, and even treated us to ‘puchkas’, a Kolkatan speciality. She was also kind enough to buy us all chicken and vegetable rolls, which we thoroughly enjoyed.We were the given the opportunity to wander around a nearby bazaar and shop to our heart’s content. After profusely thanking Mrs. Neogi, we bid adieu and headed on back to the hotel. Truly a memorable first day! 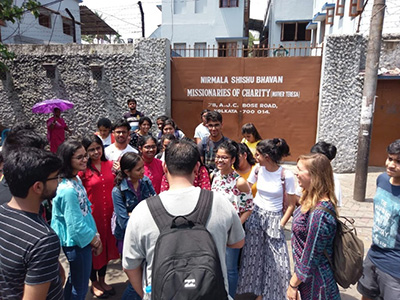 We woke up at 6:45 AM, groggy from the previous day and excited for what awaited us. We first travelled to the Missionaries of Charity, a foundation established by Mother Teresa. We perused through old documents and keepsakes that belonged to Mother Teresa herself, and read about her valuable contributions. Through learning the history and life of this inspirational woman, we were able to fully comprehend just how much she had sacrificed for the welfare of others.

Afterwards, we visited a children’s home that had been created by the same foundation. It was, safe to say, a heart-wrenching experience for each and every one of us. We witnessed the truest forms of love through the gentleness and care the sisters nurtured the children with. We saw the harsh reality of underprivileged individuals, which opened our eyes to the luxuries and comforts that we often took advantage of, unaware of the plight of others.

We then stopped at a local restaurant and tried one of Kolkata’s delicacies named ‘doodh cola.’ For the uninitiated, Doodh Cola is a mixture of lassi with Thums Up! The proportions have to be just right, with the accurate number of ice cubes for it to be a cold drink so absurd, and so inexorably Indian - with its chaotic yet soothing flavour - that one simply cannot have just one!

We, then, headed to Future Hope. After a sumptuous lunch, the boys left for the fabled Kolkata ‘Maidan’. The girls stayed on at Future Hope and experienced an exhilarating Zumba session, which was followed by an energetic game of volleyball.

Our interactions with the students from Future Hope were more meaningful today. We learnt about their likes and dislikes and bonded over games. We realized that the students of Future Hope are fitter than us. Ironically, in spite of the minimal resources at their disposal, they are driven to succeed.

As the sun set behind the Victoria Memorial, we began our journey back to the hotel. It was an exhausting day, but every minute was worth it!

The day ended with us planning for our proposed art work, dance routines and the piece de resistance - the lip dub!

Day 3 in Kolkata and the delectable spread in the morning reminded us why this was known as the City of Joy!

After lunch, three-fourths of our team went to Future Hope while the other quarter were joined by three teachers and ten students from the host school for an excursion to Victoria Memorial.

The VM is like a marble tear drop, beautiful, ecstatic and confident in its majestic presence at the heart of the city.The memorial itself consisted of a large dome, which housed the Statues of Queen Victoria and King George V. There were also several ancient artifacts and art pieces previously in possession of the royalty, which were on display.

There was also a special art exhibit, which contained original pieces that were created by European and Indian artists. Apart from those, they also had the opportunity to see paintings made by famous artists, such as Rabindranath Tagore, WIlliam Daniel, accompanied by rare copies of illustrated texts by Shakespeare and traditional, almost extinct art forms such as the Kalighat _Pattachitra_.

The students reached the memorial roughly at 12 PM, and were immediately transported to a time characterized by gaslight, horse - carriages and the rich cultural heritage that Bengal has draped around herself. 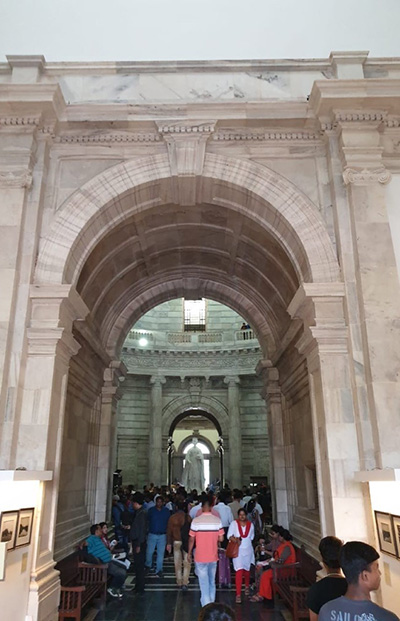 From there, the students went straight to Kalighat, a place which is known for its dedication to the Goddess Kali.

On their way to the temple, they passed through a bazaar, which sold ‘Kalighat Patachitra’ paintings. What makes these paintings so special is their use of clay, wood and stone on a piece of paper, which results in the visibility of both light and dark shades. In the Kalighat Temple, the children witnessed several customs, such as the offering of animals as tribute, devotional songs, and the creation of the Kalighat Patachitra paintings. Through this trip, they accumulated extensive knowledge on the history of Bengali art, and are undoubtedly looking forward to trying out the Patachitra paintings with their friends from Future Hope!

For Lipdub, we first focused on perfecting and teaching the choreographies to each team member, which was a grueling yet exciting process. After teaching the children both lyrics and choreography, we invited both the Art and Music teams to participate in the video, which they graciously accepted. Therefore, our final trial video of the day included every Modernite, and was a smashing success!

Our planning sessions at night are getting more intense and everything seems to be falling into place.

In the morning, the students reached Future Hope and separated into their respective teams. The Music team tirelessly worked to perfect their school song, while the Music team collaborated with the Future Hope children to create paintings that involved the infusion of Warli and Kalighat styles. Meanwhile, the Lipdub team delegated responsibilities to the rest of their members and overlooked more trial runs. This time, they also included both the founder Tim Grundige, Ms. Megha, and the CEO of Future Hope, Ms. Sujata Sen, in their video! 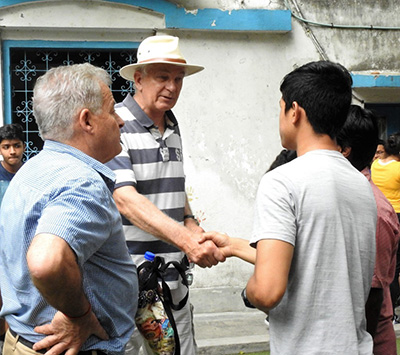 The music team worked on the composition of the song, which they had immense fun with. The students also organized games session with the children of Future Hope, such as ‘Antakshiri.’

Afterwards, the children were taught how to dance using the ‘boom snap clap’ technique.

Before lunchtime, we were given the opportunity to meet and interact with the famous David Gower, a former cricket captain for England.

Finally we made our way to the ‘maidan’, which boasted vast grounds and picturesque greenery. We played a number of games and drills with the children of Future Hope, such as football, cricket, and rugby. Unsurprisingly, the Future Hope team defeated us in all games! After a tiring yet fruitful day, we returned to the hotel to freshen up. However, our teachers had a surprise in store for us: momos! Satiated, we headed to our rooms, already anticipating the next day. 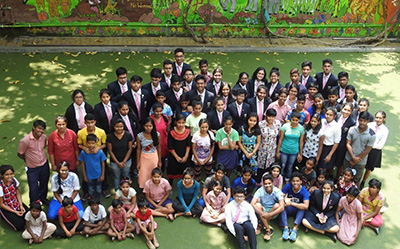 As today was our last day at Future Hope, our itinerary had a new addition: an evening showcase, in which all teams would have to feature exhibits that detailed the work they had done over the week. By early morning, we reached Future Hope, clad in our school uniforms to take pictures with the students of Future Hope. Afterwards, we quickly changed out of our uniforms and started preparations for the Lipdub.The Lipdub team handed out props to all the students, some of which included streamers, ribbons, balloons, coconuts, and lungis (for the Lungi Dance section, obviously.) The preparation process was hectic yet fruitful, as our final take was extremely successful!Once the filming was complete, the video editing team started their work, while a group of students began to cook dishes for the evening's event. Meanwhile, the Music and Art teams added their finishing touches to their exhibits.At around 5 PM, the showcase kicked off. There were a few poignant speeches delivered by students of Future Hope and Modern alike, which moved the audience. The Music team then delivered a fine performance of the FH school song, and was met with loud applause. This was followed by the Art team, who displayed an impressive number of artpieces that truly captured the spirit of collaboration between the children of Modern and Future Hope. In fact, the Art Team created two pieces of art, one of which they kept at Future Hope and the other will be carried all the way to Modern.

Last but not least came the Lipdub video, which had the children rolling with laughter. The team's hard work and efforts truly paid off!

However, the main attraction was definitely the food. Some of the delicacies the children had prepared included chocolate truffles, sandwiches, pakodas, and watermelon juice. 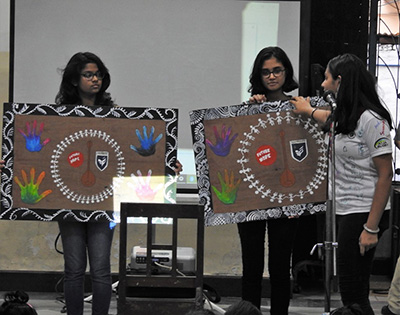 However, all good times must come to an end. We started to say our goodbyes to the children, which was perhaps the hardest part of the day. There were several tears, contact details being exchanged, and numerous promises to keep in touch. However, perhaps the most prominent feeling was that of gratitude. We had come to Future Hope to teach and learn, but also formed friendships along the way. From learning how to play a new sport to teaching the children of Future Hope the largely popular 'Cup Song’, some of the experiences we shared with these children will never be forgotten.

In the end, even though we said our physical goodbyes, we know that each and every one of them shall be in our hearts.

The day ended with a visit to The Quest Mall. We were given 1 hour to shop before we returned to the Hotel for dinner. The dinner ended with our teachers distributing the certificates and cutting a chocolate cake to celebrate our efforts.